Nancy Georges comments on Delayed Effects of GFC for Retailers

Valerie Khoo and I discussed the delayed effects of the GFC on retailers.   This is a topic that I am passionate about and it was a great opportunity to raise awareness and offer a few suggestions to increase sales.  Valerie’s piece appeared in today’s Sydney Morning Herald. 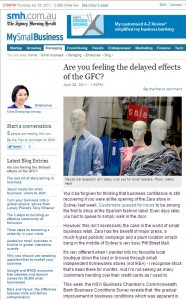 Georges says retailers need to clear old stock as soon as possible and replace with new items. “Lower the price and get rid of it,” she says.

For those who cry poor, Georges points out: “You don’t need to replace 10 products with 10 products. You might get six products. If you keep the old stock, it will still be there in six months. The only difference is that it will be six months older.”

Georges also says you should never underestimate the power of good customer service. I agree. I walked into a store near closing time on the weekend and the sales assistant simply yelled at me: “EXCUSE ME. We’re CLOSED!” This was regardless of the fact that they door was open, the sign stated ‘Open’ and there were people in the store. Just. Plain. Rude.

Georges says customers are now looking for new lifestyle products. So let’s say you run a homewares store. Then you need to think beyond cushions and wall-hangings. You want to consider candles, books on interior design, handbags, scarves and so on.

“A general store needs to be more general,” she says. “study what consumers are looking for now.”

Get online – or else

Georges also urges retailers to get online – that is, to have a website that is also an online store.

“Small independent retailers need to embrace websites and ecommerce,” she says. “Consumers expect everybody to trade online. That’s their benchmark expectation so if you’re not going to meet them at the base level, they’re going to find someone who will.

“Eighty four per cent of consumers research their purchases online; this means they can do their homework before they even come into the store.

“Generally speaking, let’s say a business is not online. If they then embrace ecommerce, they will grow incrementally simply because they’ll now be in a space they weren’t in previously.”

A big advocate of social media, Georges believes it’s important for small retailers. “Consumers authenticate businesses via the internet,” she says. “If you’re not on social media, that’s another mark against your name.

“I know that what I’m saying might shock a lot of small retailers. But people need to get informed and educated. You have to act now because this is not going to go away. This is the world we live in.”