I had a week from hell in terms of customer service, but the pinnacle had to be the service and ethics of Mytopiastore on Ebay.

I ordered a Cantilever Umbrella for Mum’s birthday party on 24 October, party was on 10th Nov and they say 3 – 7 days delivery – with 17 days out I figured I Was safe!

On 5 November, I checked the tracking details on the site & Blue Star Logistics site said it had been picked up and in transit.  I called them to be told in fact they didn’t have it and to contact the seller!! I don’t know why the site would say they have if they never picked it up….

On 6 November, I contacted them via ebay messages to say that we hadn’t received the item, to be sent an automatic; they picked it up – this never happens – but when it does we locate it…..WAIT 5 DAYS THEN CONTACT US.

REALLY that is after I told them I needed it for the 10th – obviously no-one reads the email they just cut and paste a response.

I then rang the help line – which is a call centre and not the seller to be told that someone will contact me.

More messages saying the same thing as above.

Then I rang and insisted that the SELLER ring me – it took some insisting but they rang me – the day before the party – Friday afternoon at 3pm and this is a brief recap….

I lost it – I insisted on speaking to the supervisor- each point is a separate call:

IT BROKE???  I told her I knew she was lying and to refund the item immediately!!

Appalling!! I couldn’t believe how bad their service was!!

The things that made me really cranky were:

I am the wrong person to do this to – I get that but I can only imagine how many other people get treated like this and say nothing.

The only reason I bought it on ebay was that I couldn’t find an online store that sells these products?!

Yes we had the party without the umbrella.

Please share this info and name of this inferior retailer so that others avoid the same bad service and to send a clear message – get customer service right!!! 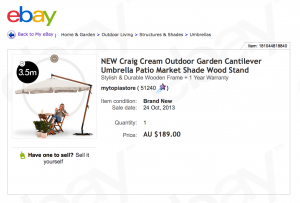