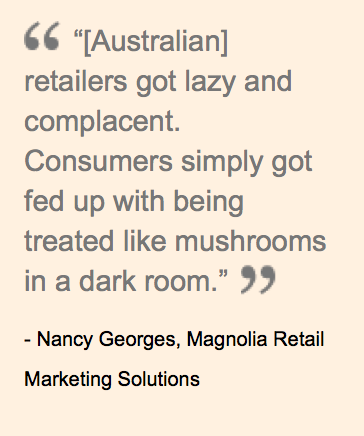 “In a country whose previously isolated landscape has been devastated by the introduction of rabbits, foxes and other invasive species, Australia is facing its latest incursion: foreign retailers.

H&M opens its first store in Australia on Saturday as the Swedish fast fashion giant becomes the latest in a string of foreign retailers to move Down Under in a trend that is shaking up the domestic market.

“Australia is strategically important for us. The people here are well travelled, and the country is an important destination for Asian tourists,” says Hans Andersson, H&M’s Australia manager.

The influx of global retailers is transforming the high street where rents in Sydney’s prime shopping district are among the world’s most expensive. It is forcing a restructuring at local retailers, which until recently were insulated from foreign competitors due to geographical remoteness.

But a relatively robust Australian economy – which has had 22 years of consecutive growth – has become a draw too strong to ignore, while large numbers of Chinese and Japanese tourists to the country have also attracted luxury brand retailers.

“There is such pent-up demand from overseas retailers looking for retail space in prime locations that it is proving difficult for them to get into shopping centres,” says Alistair Palmer, head of retail at property company CBRE.

The Swedish fashion house spent three-and-a-half years identifying a suitable location for its first store in Australia and is still searching for properties in Sydney, Brisbane and Perth.

Colliers, the real estate group, estimates international retailers plan to introduce 235 stores across Australia over five years, gobbling up 220,000 sq m of retail space. It is part of a wave of foreign investment which dates back to 2008, when Apple opened a flagship store in Sydney.

“The hiccup in the world economy caused by the great financial crisis prompted international retailers to look beyond established markets in the US and Europe towards growth in Asia,” says Michael Bate, head of retail at Colliers International.

China was the big draw for many retailers in the first phase of this expansion, with H&M setting up its first store in China in 2007 and Gap following in 2010. For retailers Australia is the next logical step.

“Many retailers have got their logistics in place in the Asian region. It isn’t difficult to bolt on a presence in Australia to capture the 23m consumers here,” says Mr Bate.

Deutsche Bank suggests Australia can be hugely profitable for new arrivals such as Inditex, which opened its first Zara store in 2011. In 2012, Zara’s six Australian stores made A$106.8m in revenues and earned A$18m profit. Zara’s profit margins in Australia were higher than the group’s average, according to research from company filings.

A boom in online sales by Australian residents has lured others, including Topshop, Down Under.

“We knew from the success of our online business that brand awareness was strong, and that’s always a great position to be in,” says Paul Gould, international director Arcadia Group, which opened its first Topshop in Melbourne in 2011.

Marks and Spencer, mulling setting up stores in Australia, is building a big online presence by offering free delivery for purchases above £30.

Almost a quarter of the A$14.7bn online purchases made last year by Australians were from international retailers, most on offshore websites that do not charge local sales tax on items under A$1,000.

Australian retailers are lobbying the government to tighten the tax rules, while a recent dip in the value of the Australian dollar has slowed the pace of overseas online sales.

He blames the longer-term surge of the Aussie dollar to record highs and the ability for consumers to avoid sales tax for soaring overseas online sales.

Some well-established local retailers such as Brown Sugar, Fletcher Jones and Snowgum have been forced into receivership and Billabong International, the surfwear company, has similarly endured a dire few years.

“Our retailers got lazy and complacent,” says Nancy Georges, founder of Magnolia Retail Marketing Solutions, a consultancy. “Australian consumers simply got fed up with being treated like mushrooms in a dark room. They moved online or went to the new international outlets.”

But not every foreign invader is successful. Coffee chain Starbucks, which arrived in 2000, closed 61 of its 84 Australian stores in 2008 due to slack sales and a local love of European-style coffee.

Local competitors such as Premier Investments, which owns the Just Jeans and Smiggle brands, are also upping their game. Last week it opened its first Smiggle store in the UK, and posted a 12 per cent increase in profits to $52m for the first half of the year.

“It’s up to H&M and Uniqlo to prove that they can actually do it [in Australia],” says Mark McInnes, chief executive of Premier Retail. “That being said, we’re not taking them lightly.””

Copyright The Financial Times Limited 2014. You may share using our article tools.  Please don’t cut articles from FT.com and redistribute by email or post to the web.