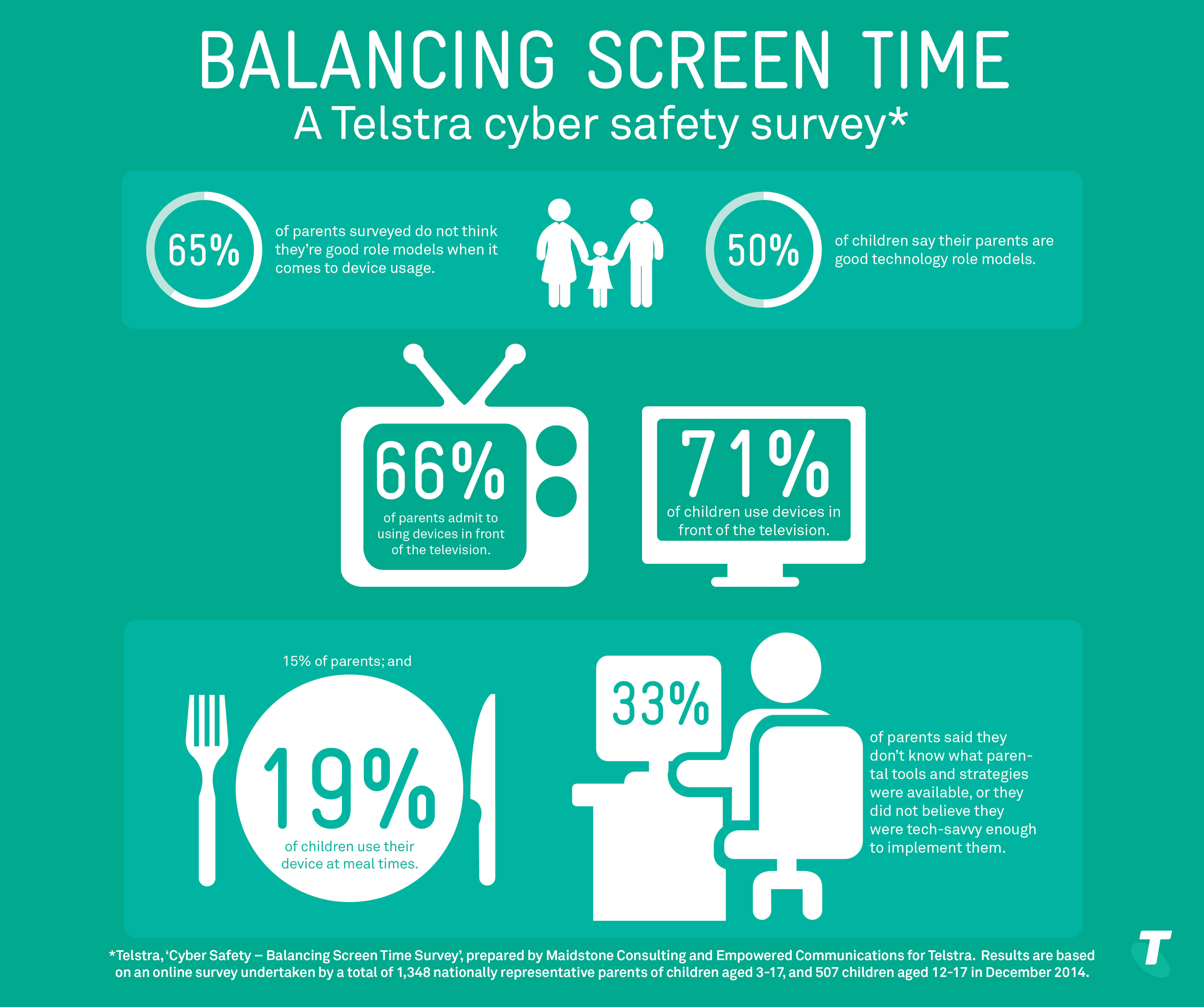 Telstra released the results of research, Cyber Safety – Balancing Screen Time Survey, undertaken to see the effect of devices being in the home and the impact on the family.  The media release is below so you can read it in detail.

Over the last couple of years, I have been doing ‘Social Media and Parenting’ talks at schools, which started after speaking to parents (mostly mothers) who seemed lost navigating the digital waters and had simply thrown their hands in the air and given up – not knowing where to start.

There were so many interesting things to come out of the research and I discussed them with Shelly Gorr, Cyber Safety Manager, Chief Sustainability Office at Telstra.

Shelly made the point that the data shows that modelling is very important in every aspect of parenting and it is no different in managing device time. Basically, children do what they see their parents doing.

The stats showed the usage and behaviour is the same for parents and children;

Balancing the time on devices with family time requires rules being set and followed.  Rule meal times as device free and follow it – have a basket that everyone puts their devices in as they enter.  This will add some ritual and ceremony to it too.

‘Second screening’, having two devices on at the same time to access supplementary content or apps, is not a bad thing when watching television (in fact I think it makes the experience better!) but it may not be as good when children are doing homework!

“When children were asked about perceptions of their parents’ device usage:

Telstra have shared some great tips below to help parents navigate the device / digital waters, which are inline with the advice I give to parents.  The most important thing to remember is that parenting has not changed, children need parents to show them and support them in any new activity, this is no different.

The analogy I like to use is a parent teaching a child to ride a bike; they hold them, teach them, support them then let them go while still watching and guiding.  When it comes to devices / digital world, they seem to not apply the same teaching principles.

When it comes to access it is uber important that parents have all of their childrens’ password, for a couple of reasons; that they know you can see their content at any time and if their account gets hacked and inappropriate info posted – parents can log in and remove.

Shelly has a great tip for teaching children to respect the secrecy of their passwords, “When logging into my device, I say, ‘ Mummy’s putting in her secret password’, while hiding the screen.” This modelling is very positive and will help them not share their passwords.  Most childrens’ accounts are hacked by their friends who have their passwords.

Shelly advices that most ISPs and browsers have controls that allow parents to manage:

Talk to your children about the amount of digital time they’re living and then, based on what you agree is a healthy balance, set ‘switched off’ times of day. Help your children create a media use roster allocating blocks of time for homework, chores and their screen time.

Support and encourage your kids in activities that don’t involve a digital device. A ball game or reading a book are all great ways to show kids how they can enjoy themselves without a mobile, tablet or computer.

Make sure you’re seen as a positive example. Do you want the dinner table to be a device-free zone? If so, then have everyone (including Mum and Dad) turn off their mobile phones and devices during dinner, or when taking part in family activities. Children are happier following rules if everyone in the family plays by them.

Lack of sleep can affect alertness, concentration and memory. For a better night’s sleep try encouraging children to switch off at least one hour before bedtime. Create a charging station and charge all household devices in the one spot overnight.

Many parental controls tools allow you to set time-of-day restrictions on children’s device usage. We recommend Telstra Smart Controls® for mobile devices and Telstra Online Security for your home network.

Not all screen time is created equal. Think about the differences between using a device for homework or creative expression versus using it for passive entertainment.

Parents of Aussie kids about to return to school may not see themselves as role models when it comes to device usage and balancing screen time, but in 2015 they’re being asked to set a better example because children copy their behaviour.

Sixty-five per cent of parents surveyed do not think they’re good role models when it comes to device usage, despite 50 per cent of children saying their parents are good technology role models.

Telstra’s Cyber Safety Manager, Shelly Gorr, said the results are a reminder to parents that they’re a key influencer on their children’s online behaviour.

“Children model their parents’ behaviour so it’s only natural for them to copy the example set by their mum or dad in relation to the way they use their device. As families prepare for the new school year, we’re encouraging parents to be mindful of the example they set and talk to children about ways they can balance their digital lives.

“So, for example, if it’s important to you that mealtimes are device-free, make sure you put your mobile away during dinner because children are happier if everyone in the family follows the rules.”

About the research: This research was conducted via online survey by Maidstone Consulting and Empowered Communications on behalf of Telstra in December 2014, uniquely researching both Australian adults and children regarding their use of technology devices. One thousand, three hundred and forty eight Australian parents of children aged 3-17 and 507 Australian children aged 12-17 responded.